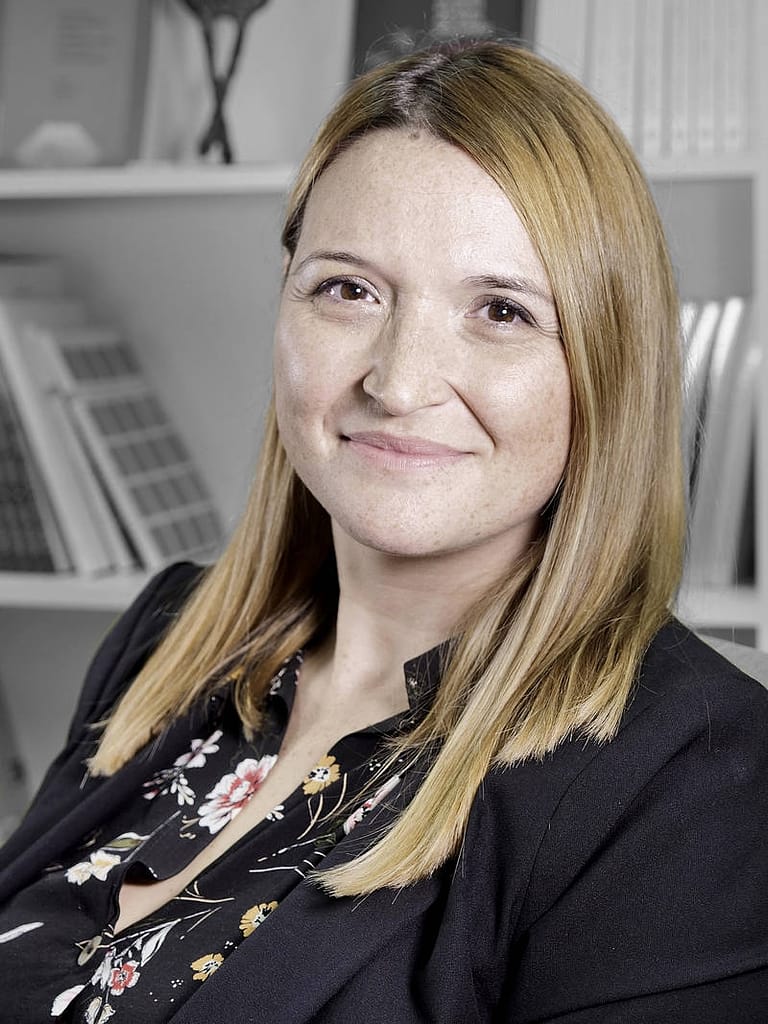 M.Arch in architecture and urban planning (The Faculty of Architecture University of Belgrade 2008)

B.Arch in architecture and urban planning (The Faculty of Architecture University of Belgrade 2006)

2009-2010  Assistant at The Faculty of Construction Management at Univesity Union Nikola Tesla, Serbia

2011-2020 Spatial, ecological, energy and social aspects of settlement development and climate change- mutual influences (Ministry of Science of the Republic of Serbia –TР 36035)

2021 – Recognition at the 30th Salon of Urbanism, in the category of nature and environmental protection and landscape architecture for the Study of the development of cultural and historical memorial complex Brankovina and proposed measures for protection against climate change

2020 – Recognition at the 29th Salon of Urbanism, in the category of urban projects and realizations for the Urban Project for the construction of a sports and recreational center at Stara planina

2012 – Second prize at the 21st Salon of Urbanism, in the category of research and studies in the field of urbanism for the Preliminary Program of Urban-Architectural Study of the conversion of the war barracks complex in Bela Crkva

2011 – First prize at the 20th Salon of Urbanism, in the category of urban projects and realizations for Urban projects with conceptual architectural solutions for eight locations within the 1st phase of the tourist resort Jabučko Ravnište at Stara planina

Marić, I., Pucar, M. and Kovačević, B. (2015) Reducing the impact of climate change by applying  information technologies and measures for improving energy efficiency in urban planning, Energy and Buildings 115, pp.102-111

Kovačević, B. and Spasojević, A. (2012) Bloks along Yuri Gagarin Street – layer by layer, Proceedings of the International scientific conference Architecture & Ideology, Belgrade: the Faculty of Architecture and ULUPUDS, pp.906-915

Kovačević, B. and Marić, I. (2012) Integration of bioclimatic principles into architecture of wellness tourism: the example of the Spa Center at the Balkan Mountain range in Serbia. In: Benyounis, K. (Eds.) Environment & Clean Technologies, Proceedings of the 5th International Conference on Sustainable energy & environmental protection SEEP 2012, Dublin: Dublin City University, School of Mechanical and Manufacturing Engineering, pp. 56-61

Simić, B. (2019) Transformation of the Urban Morphology Under the Influence of the New Technologies, International conference The e-Future of Cities- Between temtations of exponential technology growth and the concept of human city, Belgrade, 24-25 October 2019, pp. 429-439.

Pucar, М., Kovačević, B. and Simonović Alfirević, S. (2015) Model of development of the cultural-historical memorial complex Brankovina and proposal of measures for protection against climate change. In: Pucar, М. and Nenković-Riznić, M.(ed.) Spatial, ecological, energy and social aspects of settlement development and climate change, special edition no.78, Belgrade:IAUS

Маrić, I. and Kovačević, B. (2012) Typological characteristics of settlement in the zone of Golubac gorge and their improvement in the function of tourism development. In: Milijić, S., Josimović, B. and Crnčević, T. (ed.) Sustainable spatial development of the Danube region in Serbia- book 1, special edition no. 71, Belgrade:IAUS, p. 227-250

Маrić, I. and Kovačević, B. (2013) The concept of ecologically planned expansion of the city of Bela Crkva. In: Pucar, M., Dimitrijević, B. and Marić, I. (ed.) Climate change and built space: Politics and practice in Scotland and Serbia, special edition no.70, Belgrade:IAUS, pp.224-255

Маrić, I. and Kovačević, B. (2014) The Rules of arrangement and construction of rural settlements on the banks of the Danube-tendencies in urbanism an architecture. In: Maksim,M. Krunić, N. and Nenković-Riznić, M. (eds.) Sustainable spatial development of the Danube region in Serbia -book 2, special edition no.73, Belgrade: IAUS, pp.251-272.

Маrić, I. and Kovačević, B. (2011) The principles of bioclimatic architecture applied in the project of the Spa Center on Stara Planina, Arhitektura i urbanizam, no.33, p.87-101

SPA CENTER and HOTEL at tourist resort Jabučko ravnište, Stara planina (2011) Urban project with a design of buildings, First prize at the 20th Salon of Urbanism

BELA CRKVA (2012) – Preliminary design of urban-architectural solution for the conversion the war barracks complex, Second prize at the 21st Salon of Urbanism

SOCIAL HOUSING in the settlement of Ovča, Belgrade (2011) (associate), Equal purchase at the competition

BRANKOVINA_ General Regulation Plan for the cultural and historical memorial complex (2015) (associate), Recognition at the 30th Salon of Urbanism

Association of Architects of Belgrade and Serbia

Membership in the boards of scientific and professional journals

Editorial board of the Journal of Arhitektura i urbanizam (since 2016)

Other (teaching engagement, professional practice and other forms of education)

2016 – presentation of Conceptual program urban-architectural study of the conversion of the war barracks complex in Bela Crkva, within the professional practice od second year students of master`s academic studies Faculty of Geography

2014, 2015 and 2016 – presentation of the General Regulation Plan of Brankovina within the professional practice od second year students of master`s academic studies Integral Urbanism from The Faculty of Architecture

2013- Lecture at Faculty of Civil Engineering and Architecture in Niš From concept to context with D.andM.Marušić

2013 – Presentation at BINA About architecture: showing what is visible and revealing what is not, with D.Marušić, M. Marušić and Dj. Alfirević

2007 – Three months professional practice at The Faculty of Architecture at Tishreen University in Lattakia, Syria